The music video for Beck’s song Heart Is A Drum opens with a sketchy image of a person on a road. We then see the singer by a house, he seem to be both on the inside and outside, looking in the window from the garden and looking out the window from the other side. This reminds me of Margitte’s painting In Praise of Dialectics which is meant to show that the inside of a house is always connected with the outside, like with anything else: philosophy, concepts, literature and so on.

After this the video depicts various and shifting images: a boy on a road, Beck and a man walking next to him, the shadow of Beck on a wall, the boy from the road by the house (also both inside and outside, when on the inside flipping a curtain up and down on the window), at this point the lyrics of the song has come to the lines about time: “Your Heart is a drum keeping time with everyone”. The line right before also has connotations to the concept of time: “You’ve lost your tongue when you fall from the pendulum”. We also find hints to this in the video: a silhouette of something that looks like a clock, one of these old tall ones, standing on the floor. And then Beck leaves the house, he’s spotted some strange creatures dressed up like in clothes and helmets looking like a crossing of astronauts and beekeepers. 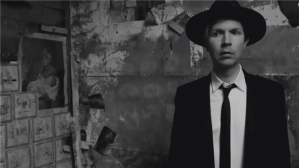 Still from the music video to Beck’s Heart Is A Drum. On the wall you can see a painting which seems to be of Virgin Mary and Jesus.

I took the title for this post from a book entitled Romanticism Against The Tide of Modernity. There Michael Löwy and Robert Sayre writes about the romantic tradition in literature, art, protest movements and so on, claiming it’s not limited to a style of writing or painting, but a way of thought. Following the line of Marx they claim that romanticism always since the rise of capitalism has been here as it’s shadow, a criticism and force against it’s domination on modern life. Romanticism claims that something has been lost, but exactly what? Löwy and Sayre asks, and answers also: We have to look at it’s values to circle in that. These values are among other things community and the individual value of each human being (but not like capitalistic individualism which tells everyone that they can be superstars and by that gives broadcasting companies and advertisers lots of money on talent shows and things like that). In a podcast I just listened to Beck talks about the value of old folk songs and the way of thinking about music in the folk scene. He highlights the camaraderie among musicians and underlining it’s importance in creating new music. He talks about Record Club and Newport. All this are factors that places him in the romantic tradition I sketched up over here.

Now, lets go back to the video: Beck has left the house and enters a small cabin. We then see a glimpse of a light haired woman waking up (“High as the light of day” he sings now). Inside the cabin there are collages of pictures on the walls, Beck walks over to an image of a woman and her baby dressed up in the style of Virgin Mary and baby Jesus. He touches it softly.

The scene shifts to a priest looking man holding the light haired woman in his arms while wind blows through their hairs and clothes. (“Falling down across your lost highway” Beck sings now, with reference to Hank Williams old song). Back to Beck and his image on the wall, still touching it softly, lifting his head to the left. Outside on a field the man with the scythe appears, and the woman falls to the ground. After this Beck walks off again, we can see images of him crossed with scenes with the creatures I’ve mentioned: the priest, the woman, the man with the scythe. A new person has arrived: a little girl holding flowers. She stands next to the priest while the man with the scythe comes towards them (he has been pointing his fingers straight into the viewer a couple of times now, while Beck has been walking fast straight ahead, making it seem like his pointing at him, or at me who looks at the video. The woman appears in the same camera shot as Beck, and now the beekeepers appears. Now and then we see shadows on walls, glimpses of Beck’s face looking like these ads of phantom rising that has been circulating on the internet lately. He’s always searching, walking through houses and forests, trying to see what we can’t see: angel like creatures, death, places which is outside of time.

In Edmund Husserl’s Origin of Geometry: An Introduction, Derrida examinates Husserl’s philosophy on science. He begins with a walkthrough to Husserl’s views on geometry and historicity, and Derrida doesn’t seem to have any problems with his conclusions:

“Pure-interconnections-of history, apriori-thought-of history, does this not mean that these possibilities are not in themselves historical ? Not at an , for they are nothing but the possibilities of the appearance of history as such, outside which there is nothing. History itself establishes the possibility of its own appearing.”

“The paradox is that, without the apparent fall back into language and thereby into history , a fall which would alienate the ideal purity of sense , sense wou ld re main an empirical formation imprisoned as fact in a psychological subjectivity-in the inventor’ s head. Historical incarnation sets free the transcendental, instead of binding it.”

The word became a man, the Bible says. The word of truth. Merry Christmas!