Tim Key and Simon Amstell considering weather he is a writer or weather being a stand up comedian differs from being a writer, on attitude towards life and that we’re all going to die, and weather this is facts, philosophy or misery, hairdo, self acceptance and so on…

And by the way here’s a quote from a blog post about Kafka, I think it fits here. Have a nice summer!

Many complain that the words of the wise are always merely parables and of no use in daily life, which is the only life we have. When the sage says: “Go over,” he does not mean that we should cross over to some actual place, which we could do anyhow if the labor were worth it; he means some fabulous yonder, something unknown to us, something too that he cannot designate more precisely, and therefore cannot help us here in the very least. All these parables really set out to say merely that the incomprehensible is incomprehensible, and we know that already. But the cares we have to struggle with every day: that is a different matter.

Concerning this a man once said: Why such reluctance? If you only followed the parables you yourselves would become parables and with that rid yourself of all your daily cares.

Another said: I bet that is also a parable.

The first said: You have won.

The second said: But unfortunately only in parable.

The first said: No, in reality: in parable you have lost.

Kafka’s comment on parables can be experienced as a tension. There’s a message about something (parables) but it seems to account for nothing, it leads to nowhere: it is lost even to its own protagonist. What is this exactly? Is there an intention to share without anything shared? Or maybe, while there wasn’t anything that was supposed to be shared, the reader is nonetheless left with something (be it an intuition, a vague feeling, some sort of paradoxical satisfaction).

In his powerful essay “Franz Kafka: On the Tenth Anniversary of His Death” Walter Benjamin explicitly addressed the hypothesis that Kafka himself may not have had a complete understanding of what he was writing:

At times [Kafka] seems to come close to saying with Dostoevsky’s Grand Inquisitor: “So we have before us a mystery which we cannot comprehend. And precisely because it is a mystery we have had the right to preach it, to teach the people that what matters is neither freedom nor love, but the riddle, the secret, the mystery to which they have to bow―without reflection and even against their conscience.” […] Kafka had a rare capacity for creating parables for himself. Yet his parables are never exhausted by what is explainable; on the contrary, he took all conceivable precautions against the interpretation of his writings. One has to find one’s way in them circumspectly, cautiously, and warily. […] His testament is another case in point. Given its background, the directive in which Kafka ordered the destruction of his literary remains is just as unfathomable, to be weighed just as carefully as the answers of the doorkeeper before the law. Perhaps Kafka, whose every day on earth brought him up against insoluble behavior problems and undecipherable communications, in death wished to give his contemporaries a taste of their own medicine. (originally written in 1934, reproduced in Illuminations, tr. Harry Zohn, New York: Schocken Books, [1968]2007, p. 1241)

Glossolalia, often understood among Protestant Christians as speaking in tongues, is the fluid vocalizing of speech-like syllables that lack any readily comprehended meaning, in some cases as part of religious practice.[1] Some consider it as a part of a sacred language. It is a common practice amongst Pentecostal and Charismatic Christianity. (wikipedia) Lyrically both bands work in a way that I admire – Cocteau Twins for the nonsense glossolalia and The Cure for their precise yet loaded imagery. The first book that fed into what I wanted to make was Six Memos for the Next Millenium by Italo Calvino. He discusses five qualities that he values in literature (he died before he wrote the sixth) — these being abstract, vague concepts such as ‘Lightness’, ‘Exactitude’, ‘Multiplicity’ and so on. hat strikes me most is how he contemplates these very mysterious, unfathomable ideas that have little or no way of being measured in a fashion that is succinct and precise, condensed and careful. This dichotomy is possible to explore through music I feel because music is comprised of a series of continums: space, pitch, tone, dynamic, and so on. Read more: http://www.undertheradar.co.nz/interview/516/Dear-Times-Waste.utr#ixzz3cJ46qptD 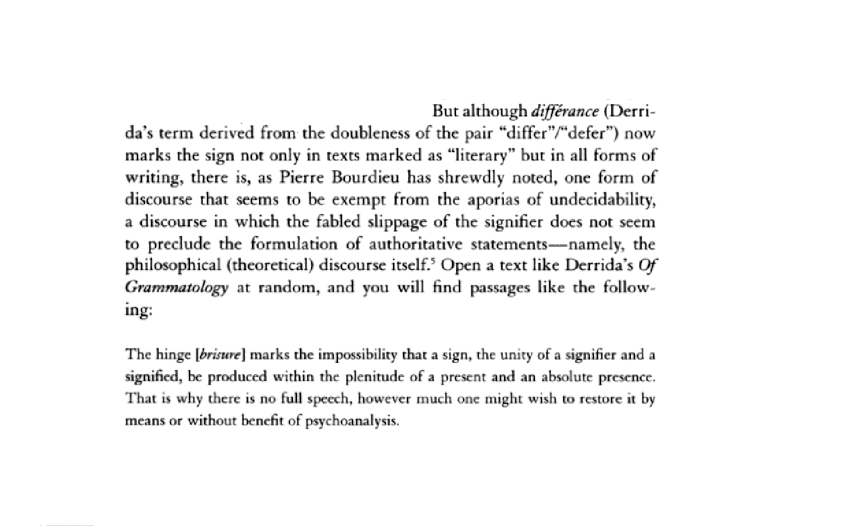 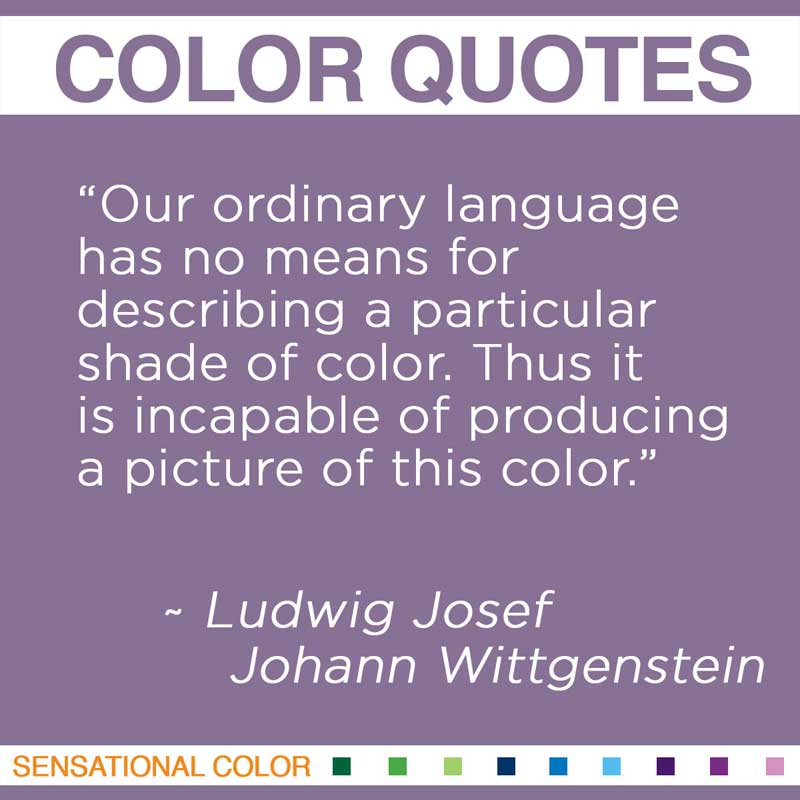 “In Why is the No Video Signal Blue? Or, Color is No Longer Separable From Form, and the Collective Joins the Brightness Confound (2011) Andrew Norman Wilson deconstructs the linguistic and symbolic convention that usually communicates the signal’s absence on any screen or projector. In a Derridian manner he shows that this blue’s metaphysical meaning is generated by an invisible game from which the individual is excluded. The blue’s detracted ontological presence leads to a never-ending displacement of its meaning’s grounds, giving rise to a feeling of precariousness that Wilson relates to our dematerialized environment.” -Bianca Stoppani, Kaleidoscope 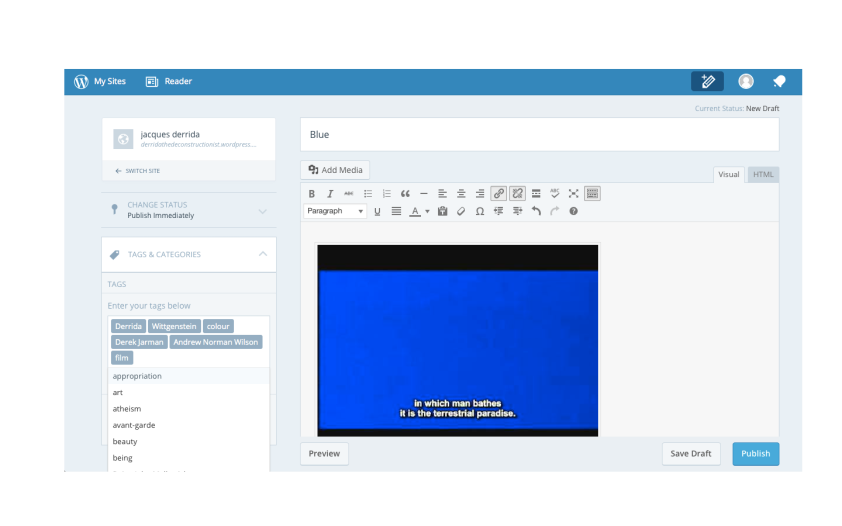 O’Hara’s attempt to dismantle dominant ideologies about life and dominant assumptions about art, is, in a sense, a deconstructive mode. In other words, by working within the realm of the ordinary, with the language that we all think, act, construct and communicate with, but somehow outside of convention (by virtue of its slang and colloquialism and therefore critical of it), O’Hara finds and reveals the extraordinary. He is eccentric, yet entirely common; he is outside of ‘approved’ language, yet completely immersed in the language of everyday life. This is not to suggest that deconstruction is some kind of methodology, which is used by O’Hara, but rather that he actively engages in an investigation of language, culture and reality that parallels (and possibly precedes and foreshadows) Foucauldian-analysis and Derridean-deconstruction. In a sense, O’Hara seems to wear a similar “lens” that correlates to ideas similarly put forth in contemporary literary criticism that undermines and subverts metaphor, meaning, and originary/natural conceptions of reality. For example, in another poem, titled Poem, he writes the following:

All the mirrors in the world
don’t help, nor am I movedby the calm emergence of my
image in the rain, it is not

I who appears or imagines. See,
if you can, if you can make

the unpleasant trip, the
house where shadows of my own

childhood are watered and forced
like overgrown blugeons, you

must look, for I cannot. I
cannot face that fearful usage (Poems 39)

Like no other poet, he makes the seemingly mundane, day to day, conversations, images, behavior, and activities something that are worth not only art, but something to keep us living, day in and day out. In a statement for The New American Poetry, O’Hara writes, “I am mainly preoccupied with the world as I experience it, and at times when I would rather be dead the thought that I could never write another poem has so far stopped me. I think this is an ignoble attitude. I would rather die for love, but I haven’t.” (Poems 500) In the simplicity of daily things, actions and interactions, O’Hara finds beauty, solace, despair, truth, anguish, and love, but, again, in a form which remains ‘consistently inconsistent’ (sic Aristotle). “Lunch is as important as love,” to O’Hara, suggests Ashbery.  Kenneth Koch has similar sentiments when he writes the following about O’Hara, “You get the feeling, reading Frank O’Hara, that anything and everything you think or see or feel can be put in a poem and it will work out right. He seems to write from the middle of all these things, before they have been divided into subjects and ideas, while they are still a part of ordinary unsorted-out days.”

O’Hara’s poems sound so much like conversation that you cannot help but be engaged. What is also interesting, in Koch’s assessment, is the idea of writing “in the middle” of things. O’Hara is interested, in a Derridean sense, in that which exists between the meaning of words and the word itself, between word and word, and finally between sign and signified. His poetry is a provocation for this reason; his words are like the everyday rambling mind, i.e. existing without cognition of the differences that create the words as they are being spoken/written, but are produced nonetheless, and with a consistent voice that seems to belong in every moment, space and gesture it occupies. O’Hara’s poems are controlled distraction or conscious digression. O’Hara’s trick, in a Derridean sense, problemitizes representation and the entire issue of the origins of meaning, and, in fact, any concept of the originary. O’Hara does not reject the Romantic sensibility of Coleridge and others, but rather, works within it and thereby subverts it. Charles Jencks defines postmodernism in a way that reflects almost precisely this strategy that is so prevalent in O’Hara’s work: “Post-Modernism . . . (is, in part) double coding – the combination of modern techniques with something else” (Jencks 29). Jencks stresses how this connects to Derrida’s notion of differance and the intense commitment to pluralism, which again is clearly evidenced in O’Hara’s work. 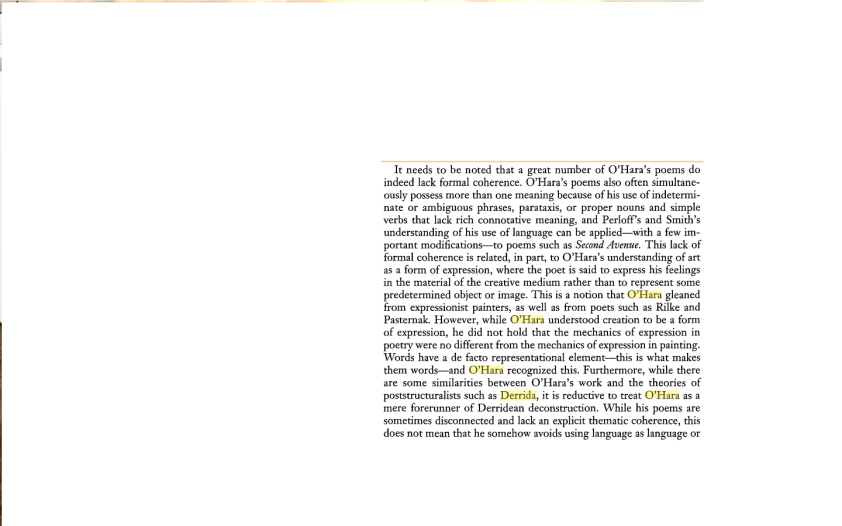 Screen Shot from Micha Mattix’s book: Frank O’Hara and the Poetics of Saying ‘I’